About the Islamic University of Najaf

About its founding: The whole world today looks forward to a human civilization that honors man and achieves his existence and happiness, and the Islamic world looks to scientific institutions that treat Islam as a global civilized project open to sober knowledge.Iraq — the country of civilizations and home to the major cultural entities where historical Muslim capitals originated — should establish Islamic universities that defend the peculiarities of the nation in the age of globalization without intolerance and self-retreat. To reshape the Islamic mind logically, with a human proof, with a spiritual impulse that is full of commitment and loyalty to Allah. For these reasons a good group of scholars and professors founded the Islamic College as a nucleus of an Islamic academic scientific university, It has been recognized by the Iraqi Ministry of Higher Education and Scientific Research, And chose its headquarters as president in the center of Najaf the most honorable heiress of the capital of Kufa and its heritage, And the heiress of Sheikh Tusi University, which has been for more than a thousand years, This idea was a dream and then turned into a reality.

Vision of the Islamic University of Najaf:

1- There is an urgent need for an academic scientific institution that teaches pure and human sciences with a clear Islamic vision.

2- The need to provide society and the labor market with scientific competencies that are intellectually and behaviorally fortified to enrich the scientific renaissance that our new Iraq is witnessing.

3- The need to contribute with official scientific institutions to attract iraqi youth to the arenas of science and knowledge instead of drifting in fields that may harm society.

4- The city of Najaf has its scientific and cognitive peculiarities that are active in the cultural and scientific renaissance, Therefore, its sons should establish a scientific edifice commensurate with the status of this city.

Official recognition:The Islamic College of the University received official recognition and incorporation leave from the Ministry of Higher Education and Scientific Research under its book Numbered (JH/2459) dated 19 August 2004 in the name of the Islamic College of The University of Najaf on the basis of article 5 of the University and Community Colleges Act (13) of 1996. The college was also granted a founding permit from the General Secretariat of the Council of Ministers on behalf of the Islamic College of Najaf, which was issued with its 331906 numbered book on 5 November 2009, which is provided for by the Council of Ministers, numbered 381 of 2009. The faculty’s staff are working diligently to develop their studies and open new sections that suit the aspirations and start of the era. In the future, the College aspires to open branches in other parts of Iraq, with postgraduate studies for master’s and doctoral degrees in its specialties. 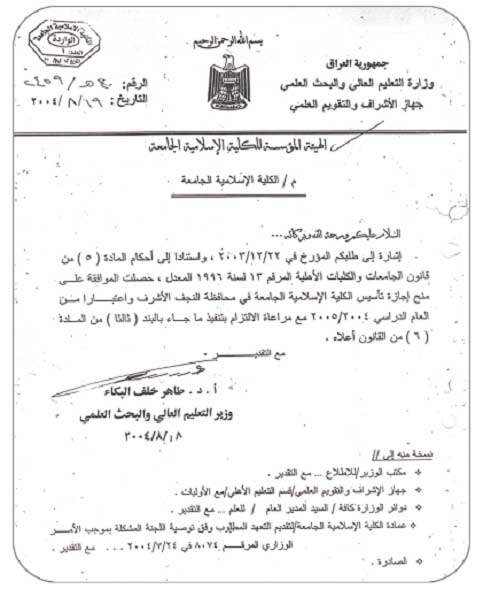 The university aims to achieve the following:

Secondly: To be a link between the authenticity of the Islamic scientific heritage enlightened by the thought of the people of the house (b) and the techniques of development and renewal.

Thirdly: Contribute to quantitative and qualitative developments in the scientific, cultural, educational and scientific research movement in various aspects of theoretical and applied knowledge.

Article 3- First: The University has a moral personality, financial and administrative independence and full legal capacity to achieve its objectives.

Secondly: The University is a private scientific institution and is of public benefit.

Article 4- First: The initial study at the university is morning and evening, Applicants are required to have a preparatory school certificate or their equivalent specified in the corresponding disciplines at public universities.

Secondly: The duration of study at the university (4) is at least four years of study and the graduate is granted a preliminary university degree (bachelor’s) in the field of specialization except for the scientific departments that need more.

Thirdly: The official language of the University is Arabic and some scientific disciplines may be taught in other living languages.

Fourthly: The duration of postgraduate studies in universities is not less than:

Article 5- The Ministry approves the development of graduate programs at the university after the availability of material, scientific and quality requirements for rare disciplines and according to the need of the country.